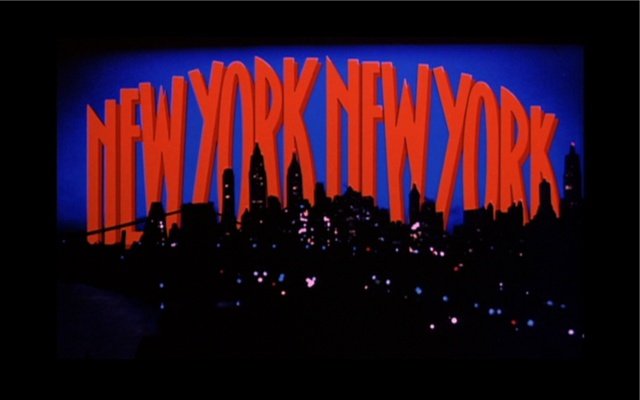 If “A Star Is Born” is a love letter to Hollywood’s myth about Hollywood, then “New York New York” (1977 starring Liza Minnelli and Robert De Niro) is a love letter to Hollywood’s myth about New York.  Director Martin Scorsese uses  his films to explore many facets of New York City’s character, from “Mean Streets” to “Taxi Driver” to yes, even “Gangs of New York.” But “New York New York” is less about the actual New York City and more about the New York City immortalized by Hollywood during the studio system. It is a place where, as Scorsese notes in the introduction to the film, the streets are cleaner and the curbs are higher.

Set against this mythical city is a simple but sad love story.  Jimmy Doyle (Robert De Niro in another barely-contained performance) is a mercurial saxophonist who meets jazz singer Francine Evans (Liza Minnelli) at a party during VJ Day.  They begin a whirlwind relationship, which asks the same questions about love and ambition as “A Star Is Born” but arrives at a different answer.  The conflict between Jimmy and Francine’s love for each other and their individual ambitions makes their marriage almost impossible.  De Niro and Minnelli improvised many of the scenes, which emphasizes the raw friction between their characters and also stands in sharp contrast with the artificial world around them.  This contrast and their conflict make the film great.

Isn't that one of the prettiest things you've seen today?

Thematic allusions to “A Star Is Born” are underlined by visual and musical ones.  Liza Minnelli gives an incredible performance, which pays homage to her mother’s legacy while creating a new character.  Francine, like Vicki Lester before her, is simultaneously drawn to and repulsed by her husband’s manic behavior.  Beyond character details though, comes Liza’s incredible musical performances.  While some border on outright pastiche (you could play a drinking game to the number of references in “Happy Endings”) her most powerful musical moment comes near the end of the second act in a song that may look familiar:

Just in case you’re not clear, I’m going to re-post “The Man That Got Away”:

Tell me she’s not channeling her mother.

Beyond the obvious similarities – dynamic camera, silhouette lighting, similar-sounding song – there’s the magnetic power of both mother and daughter’s performances.  Liza Minnelli is the last of that dying breed of show-women like Judy Garland, Lena Horne, Ginger Rogers, and Doris Day; the ones who could give an audience more in one song than their contemporaries could give in an entire movie.  With the death of the American movie musical, we’ve lost their like, and “New York New York” eulogizes them and the studio system that created them.

I hope you’ve enjoyed this month’s reviews of A Star is (re)Born!  Starting next month, we’ll be switching to our regular bimonthly posts.  I can’t spill the beans as to what movies are coming up yet, but if there’s a movie you want us to talk about, post it in the comments section below!  See you in two weeks!

Classic Film history & restoration nerd. Writer of A Year With Kate and Women's Pictures for The Film Experience. Follow me on Twitter @WeRecycleMovies.
View all posts by Anne Marie Kelly →
This entry was posted in Film and tagged Adaptations, Judy Garland, Liza Minnelli, Martin Scorsese, New York New York, Old Hollywood, The Man That Got Away. Bookmark the permalink.