Tonight are the 84th Academy Awards, so in honor of Hollywood’s big night I thought I’d share some Oscar history with you, We Recycle Movies style.  I went through all 84 years and 492-odd nominated films to crunch the numbers on how many of these illustrious films are recycled.

Turns out, the answer is quite a lot!  I have some graphs to show you (because yes, I remember how to make graphs on Excel, thank you very much Mr. Dicker!) but first I’ll go through the numbers.  Like I said before, we’re at 84 years and 492 movies, so there was a lot to go over!  I did my research using IMdB and Wikipedia, so if anything I write looks incorrect to you, please let me know in the comments section.  Unfortunately I don’t know how to post my research, but I’ll show you what I’ve got.

As it turns out, most of the Oscar nominated films are, in fact, recycled!  Here’s the graph:

It should come as no surprise that the many of the nominated films have been adaptations; Hollywood has always known how to adapt a good story, but I was still shocked that it was way over half! 310 films were adaptations, 44 1/2 (I’ll get to the half in a moment) were remakes, and 7 were sequels.

The sequels you can probably guess most of: Godfather Part II, Godfather Part III, The Two Towers, The Return of the King, and Toy Story 3 are the obvious, but there are two other early sequels: The Bells of St. Mary’s (1945) and The Broadway Melody of 1936 (1935, oddly).

The remakes, on the other hand, had one fun peculiarity that I wanted to point out.  Two movies with the same title have been nominated for an Oscar: Heaven Can Wait (1943), and Heaven Can Wait (1978).  However, the first is the story of a playboy who recounts his exploits in Hades, while the second is a Warren Beatty film about a football player who comes back to life in the body of a multimillionaire.  Here’s the weirder part: the second film actually is a remake of a 1941 film called Here Comes Mr. Jordan, starring Robert Montgomery and Claude Rains. 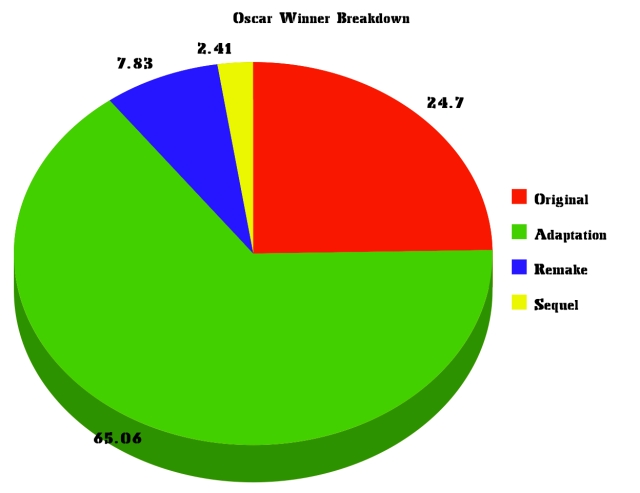 Out of the 84 winners, 54 have been adaptations, 6 1/2 (I promise I’m getting to it) have been remakes, and 2 have been sequels.  Unfortunately, this doesn’t count this year (yet).  It’s interesting how steady the percentages stay between nominees and winners.

Ok, so the half:  Dances with Wolves, the frankly blah winner of best picture for 1990, has been accused of being an unlicensed remake of the film Run of the Arrow from 1957.  Now, Dances with Wolves was adapted from a book, which makes the argument weaker.  But the plots of the two films are very similar, and Run of the Arrow’s director has called Dances with wolves “a virtual remake,” so I’m calling it half of a remake.  You’re more than welcome to disagree with me.

So, there it is!  If I figure out a way to post the spreadsheet breakdown I created, I’ll let you know.  Until then, happy Oscar viewing!