So I gave “Twilight” it’s due diligence and allowed my friend Christina to tell you 5 reasons why she read “Twilight,” but now it’s time for a rebuttal.  So here are 5 movies to watch instead of “Twilight,” if you read it for the reasons she did.

“Is that a chocolate fountain? Best prom ever!” vs “Prom? What prom? I’ve got a world to save!”

(1) High School Escapism – “Buffy The Vampire Slayer:” Ok, so for most people high school sucked.  Many of us at one time or another wanted to see it demolished.  Well, what if it was?  And what if, instead of getting stuck with your awkward date with sweaty palms during prom, you got to beat up Pee Wee Herman and David Arquette because you were the Chosen One who saved everybody while riding your boy-toy’s motorcycle?  Welcome to “Buffy The Vampire Slayer,” the 1992 film that spawned the better-known TV series.  Buffy goes from airheaded-but-popular cheerleader to less-popular-but-completely-badass martial artist with the help of Donald Sutherland (who wears nothing but tweed) in order to battle a violin-playing vampire (who wears capes and tuxedos).  If you’re still not convinced, it’s written by Joss Whedon, the guy who wrote “The Avengers.”  Plus it has lines like, “Right. I’m the chosen one. And I choose to be shopping.”  I miss the ‘90s. 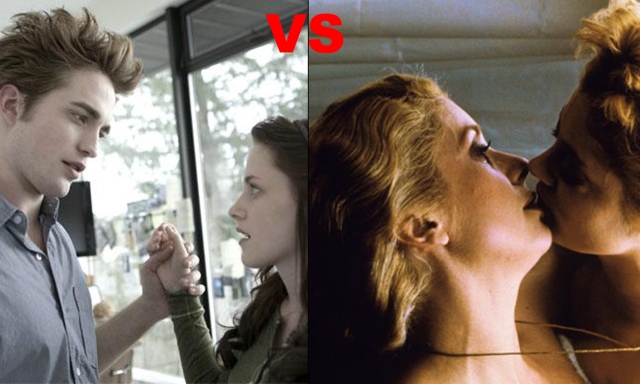 (2) Sexy Fantasy – “The Hunger:” Nearly every vampire movie fulfills this fantasy, because the vampire myth is all about the sex.  It’s all intimate contact, bodily fluid-exchange, and chiseled cheekbones.  However, “The Hunger” takes the metaphorical sex a bit literally.  In the first scene of the movie, David Bowie eats out a girl before, um, eating her.  Later, Susan Sarandon goes through ch-ch-ch-changes after sleeping with Catherine Deneuve in a sex scene that turned both actresses into lesbian icons.  It’s lots of opera music and flowing curtains, and Susan Sarandon gets a sizeable hickey and a hunger for human blood.  Even if your thing isn’t lesbian scenes, it’s a stylish movie about taboos, lust, and the obsession with youth.  And if you prefer your homoeroticism as subtext, you can always watch Brad Pitt and Tom Cruise smolder at each other for two hours in “Interview with a Vampire.”

These are pretty much the same, except one has sex scenes and actual character development.  Guess which one.

(3) Prettiest Belle at the Ball Fantasy – “True Blood:” This one has to be pretty obvious.  This HBO series is nothing but pale and pointy-fanged man candy, and all of them want to take a bite out of Sooki Stackhouse.  And fortunately for all of us, Sooki Stackhouse has an actual personality and more character dimension than just “clumsy.” If “Twilight” is the gateway drug, then “True Blood” is the grown-up Twihard’s personal brand of heroin.  (I’m just so disappointed with myself that I can make that Twilight-specific joke.)

Dorky Vampires Baseball vs Badass Chick in Black Leather. These are getting easier.

(4) Super Power Fantasy – “Underworld:” This is another inherent trope of the vampire mythos that, like the sex, pops up in pretty much every movie.  All vampires no matter what the film have super-strength, super-speed, invulnerability, super-senses, and (depending on the film) the ability to change into mist, bats, wolf-things, or weird-scary-what-the-fucks, as well as extra powers like mind-reading, hypnosis, or strong vocal cords.  However, the best two examples of the vampire-as-badass are “Blade,” and “Underworld,” and since we’re being shallow, Kate Beckinsale is so much prettier to look at than Wesley Snipes, so “Underworld” wins.

(5) Love, Marriage, and Babies – ???: Actually, I’ve got nothing.  This part of “Twilight” makes no sense, since if Edward is sparkly but dead, his reproductive organs should be sparkly but dead as well.  Pushing that aside, vampire films with kids usually exploit our horror at violence towards children or explore the terrors of adolescence.  One such fantastic film is “Let The Right One In,” which incidentally came out the same year as “Twilight.”  “Let The Right One In” is a love story between a lonely, bullied boy named Oskar and the child-vampire Eli who gives Oskar comfort and revenge.  It is a complicated, beautiful film.  Of all the films on this list, it is the one I suggest most highly. SEE THIS MOVIE.  But nobody gets pregnant.  Because vampires. cannot. have. kids.

Honorable Mention – Every Other Goddamn Vampire Movie: There are, unfortunately, a lot of movies I didn’t get the chance to talk about, since this list has to address some pretty specific concerns.  So I’m going to tell you about a few other vampire movies you should see.  If you like John Hughes movies from the 80s but wish there was more blood, then “The Lost Boys,” a surprisingly fun-if-angst-y 1987 vampire movie starring Kiefer Sutherland, is for you.  If you don’t believe vampires can be funny, check out Mel Brooks’s “Dracula: Dead And Loving It,” which while not Brooks’s best, still contains lines like “She’s dead?” “She’s nosferatu!” “She’s Italian?”  And if you want a macabre black comedy with one of Willem Dafoe’s best (if weirdest) performances, try my personal favorite, “Shadow of the Vampire,” a fictional retelling of the film “Nosferatu.”  Dafoe as Count Orlock manages to be both hilarious and heartbreaking during the only drunk vampire monolog I’ve seen, and John Malkovich’s speech at the end is fantastic.  Also worth checking out: “Nosferatu,” “Vampyr,” and “Thirst.”

Classic Film history & restoration nerd. Writer of A Year With Kate and Women's Pictures for The Film Experience. Follow me on Twitter @WeRecycleMovies.
View all posts by Anne Marie Kelly →
This entry was posted in Film and tagged Batmonth, Buffy The Vampires Slayer, Dracula, Nosferatu, Shadow of the Vampire, The Hunger, The Lost Boys, Thirst, True Blood, Twilight, Underworld, vampires, vampyr. Bookmark the permalink.