The 85th Annual Academy Awards are Sunday night! And while I may have passionately railed against one of the films nominated for Best Picture, I am still extremely excited for Oscars night. There will be a tribute to Movie Musicals, Dame Shirley Bassey AND Adele are performing for James Bond’s 50th Anniversary, and BARBRA STREISAND! Never mind the nominees, this is an awards show directly designed for me. Academy Awards, you like me! You really, really like me!

Well, I can’t dismiss the nominees fully, so instead I decided to brush off my math skills (gotta study for the GRE!) and do a statistical breakdown of the Best Picture nominees similar to last year’s post. For those of you who don’t remember and are too lazy to click the link, here’s a pie chart of Best Picture nominees through the years (by percentage): 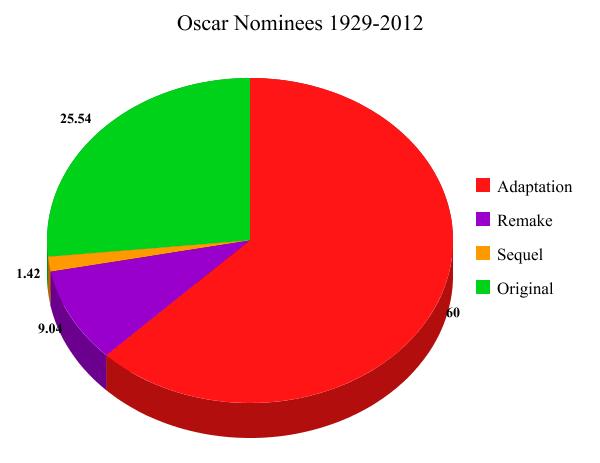 Actually, that’s pretty similar. Glad to see the Academy doesn’t stray too far from tradition. But let’s break this down further by type of adaptation:

The “other” is, of course, “Les Miserables,” which is a movie based on a musical based on a book. It is an awful copy of a copy that proves Plato’s argument about art and mimesis (an imitation of a thing is never as good as the thing itself, so an imitation of an imitation is even worse). I’ve never done a breakdown of types of adaptations before so I don’t know the historical precedent, but if I have to guess I’m going to say that it’s most likely one of the non-fiction adaptations will win. The Academy loves a good biopic.

Make sure to tune in Sunday at 5:30pm to catch Hollywood’s biggest party! And in the meantime, check out this great poster from the Academy celebrating 85 years of Best Pictures!