Jurassic Park is one of those defining movies for kids of the ’80s and ’90s. Whether they love it or hate it (and let’s be honest, we all love it), they can still tell you where they saw it, when they saw it, and whether they screamed or laughed when the T-Rex ate the lawyer off the toilet. For me, Jurassic Park was a big deal because it was the first PG-13 movie I was allowed to see. (Yes, I was one of those poor, deprived children who wasn’t allowed to see PG-13 or R-rated movies. My parents put on the Marx Brothers and Judy Garland movies instead. Now that I think about it, that actually goes a long way in explaining this blog.)

Anyway, I didn’t see Jurassic Park until 3 or 4 movies after it was released, but I remember it like it was yesterday. My dad rented it on one night after a ski trip, and we huddled together on the couch, peering at a tiny television. Even though I was so proud of myself for finally watching a PG-13 movie, I couldn’t help cowering behind by dad when the T-Rex overturned the Jeep. Even on that 15 inch screen, the T-Rex loomed large. So imagine how gigantic it looked to me when I finally got to see it on the big screen last week!

If you live in Los Angeles and you haven’t been to a screening at the Academy of Motion Picture Arts & Sciences, you are missing out on the best quality, most fascinating movie-going experience in the city (Here’s their website and mailing list. Get on it). Last Tuesday, the Academy assembled the multi-award-winning visual effects team behind Jurassic Park, as well as the head of Stereo D and one of the actors. VFX and Designer superstars Rick Carter, Dennis Muren, and Phil Tippett swapped stories about robots in the rain, hurricanes, and computer dinosaurs with actor Martin Ferrero (aka that guy the T-Rex eats off the toilet), while William Sherak (son of former Academy president Tom Sherak) discussed his Stereo D 3D conversion of the film. I wish I could give you a full transcript of the night’s conversation, but instead here’s the highlight reel.

It isn’t a stretch to say that Jurassic Park changed the way we make movies. Tippett, Muren, and Carter first discussed the long pre-production for the film. All three were working on other projects (Tippett and Muren on T2) when Spielberg first approached them about a dinosaur movie. Originally, Spielberg wanted all of the dinosaurs to be robotic puppets, to limit the post-production work as much as possible. Tippet’s response: “Can’t do that.” “Why not?” “For the same reason there’s no golf course on the moon!”

The next plan was to use a new form of animation called Go Motion (Stop Motion, Go Motion. Get it?). Go Motion was still slightly choppy, which is why Spielberg brought in Muren and Industrial Light & Magic to smooth out the action with the still-mostly-untested CGI. ILM would also do some dinosaur herds far off in the distance. Basically, at this point CGI was to be in a supporting role. That is, until Muren and his crew showed Spielberg the animated T-Rex ILM had been animating “on the side.” The dinosaur wasn’t even fully animated yet, but it was enough to convince the VFX crew to scrap Go Motion altogether, instead using a combination of robotic puppets and CGI. And I have to say, 20 years later, that combination still looks fantastic.

Of course, we as an audience weren’t seeing the film in its original form; we were seeing it in 3D. Sherak explained a bit about the conversion process: he watches the film on mute with the director, going scene by scene to glean the important details. The most difficult part, he said, was keeping the epic scale of the T-Rex. But a difficulty Sherak couldn’t address which (literally) pops up in the film continuously was that this was a film never shot with 3D in mind. Spielberg brilliantly used foreground and background elements to achieve the illusion of depth, but these tricks end up backfiring when actually converted to 3D. For example, suddenly what had been a subtle, eerie move through the palm leaves at the beginning of the film became a crashing thrust through dense forest. 3D changed the tone of the scene drastically.

However, the 3D conversion wasn’t all bad or all good. In some scenes, it worked fantastically. Sherak talked about the difficulty of converting the T-Rex jeep scene (3500 frames with multiple foreground & background elements, rain, a giant dinosaur, and reflections), but here more than anywhere in the movie, Stereo D shined brightest. I didn’t think that as a 25 year old, somewhat jaded action-movie viewer I could get so nervous that I’d jump out of my seat, but when that T-Rex smashed through the window I easily cleared 3 feet! 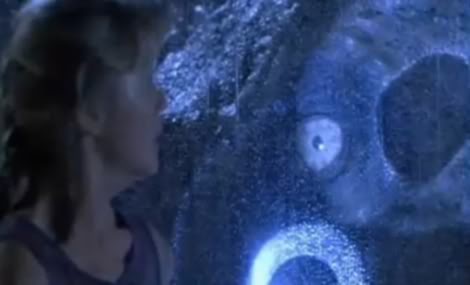 Three in one: The robotic head of the T-Rex, the computer-added effect of the dilating eye, a delicate 3D moment and OH MY GOD IT’S COMING THROUGH THE GLASS!

Muren noted that throughout the film, Spielberg kept saying, “It needs to be more 3D! It needs to jump out!” To this, Sherak smiled and replied, “We got it there for you.” 3D conversion may not be flawless, and for a great action film like Jurassic Park it may seem like gilding the prehistoric lily, but to be honest: yeah, they really did.

Jurassic Park plays in theaters for a limited time only. Go see it. I’m going again tomorrow. Your inner 8 year old will rejoice! (And then scream.)