This blog post is part of the Dynamic Duos of Classic Hollywood Blogathon at Classic Movie Hub. Check out more posts on a variety of Golden Age duos there! 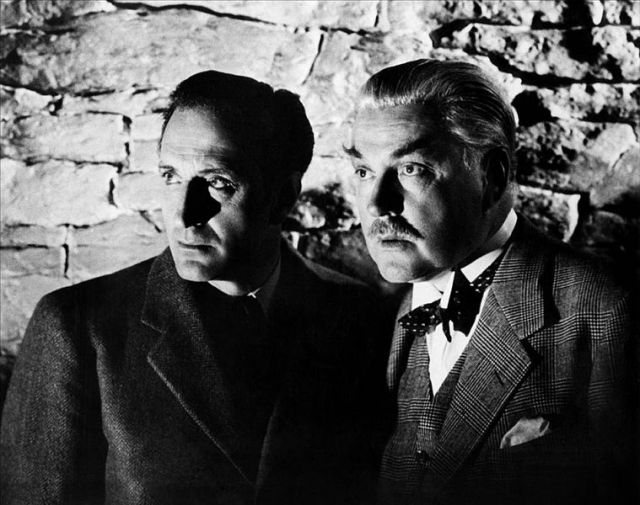 Besides Sir Arthur Conan Doyle, no single person has had as much influence on our collective idea of Sherlock Holmes as Basil Rathbone. Despite the fact that many before had already depicted the daring detective in stage, film, and art, by sheer volume of work alone Basil Rathbone blew them all away. Together with Nigel Bruce as his trusty Dr. Watson, Rathbone played the sleuth in 14 films (briefly for Fox, later for Universal) and a successful radio program that lasted 7 years. In fact, the idea of Rathbone and Bruce as the standard for Holmes and Watson has been so entrenched in the public mind that we have forgotten how far from standard their films were. The 12 films produced by Universal pushed Holmes and Watson from foggy Victorian London to WWII, and Holmes began fighting Nazis, foiling bomb plots and flying airplanes. Despite these anachronisms, Basil Rathbone and Nigel Bruce kept the core of the characters they created intact. They proved that daring and intelligence are timeless, and unfortunately so is buffoonery.

Sherlock Holmes And The Secret Weapon was the first of the Universal series that, without any explanation, plunks Sherlock and Watson in the middle of World War II. Sherlock is tasked with protecting a Swiss scientist whose bombing device would aid Britain, but thanks to Watson’s bumbling, the scientist is captured by Moriarty. The film claims to be based on “The Adventure of the Dancing Men,” but also shows influences from “The Sign Of Four” and a few other stories. In fact, here’s how it looked on Sherlock Bingo:

Maybe we should play “Blackout” instead of “Bingo”

The main building blocks of Holmes are there, despite the updated time period. Moriarty is played with villainous glee by Lionel Atwell, who sets the stereotype of the monologuing villain in a somewhat silly scene where he details his plan to Sherlock while preparing to stuff the sleuth in a chest. Luckily, Sherlock-in-a-chest is inadvertently rescued by Inspector LeStrade and another buffoon.

The buffon in question is Nigel Bruce. Starting with The Adventures of Sherlock Holmes and continuing here, Watson slowly slipped into idiocy. Watson in the books had been a companion for Holmes who not only stood as an audience surrogate, but also humanized the detective and brought an emotional core to the series. However, Basil needs no such help. Basil as Sherlock is dashing, clever, and every bit a swashbuckling hero. (Ironic, considering his other most famous roles were playing villains to Tyrone Power and Errol Flynn.) This leaves Watson in the place of “Buffoon Sidekick.” Watson is every bit the stuffy British stereotype; he “tut-tuts” at Holmes’s dockworker disguise, loses scientists and evidence with frightening regularity, and mostly seems concerned with whether he’ll get some tea and a nap in the near future. Comic writer Kate Beaton of “Hark! A Vagrant” summed him up best:

Separating Watson of the books from Nigel Bruce, the change actually works well. Basil Rathbone verges on manic in his portrayal of Sherlock, and Bruce’s soporific Watson balances that energy. It’s a little like watching a fox jump around a panda. This balancing act makes them an engaging pair. Take, for instance, this exchange:

The odd couple chemistry between Holmes and Watson brings humor to a series that can (like most Universal movies at the time) verge on the dark and macabre. As an adaptation Sherlock Holmes and the Secret Weapon works well because it preserves those elements at the core of Sherlock – the sleuth story, Sherlock’s intensity and intelligence, and his attachment to Watson – while changing cosmetic details to fit the times. Ultimately, Basil and Nigel make a great duo because they are one thing above all else: a hell of a lot of fun.