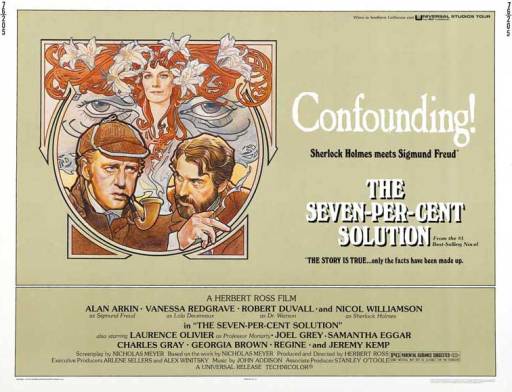 The Seven-Per-Cent Solution is Sherlock Holmes fan fiction. It’s good Sherlock Holmes fan fiction. It’s well-written, well acted, and there are no references to “dark, glittering orbs” or anybody’s manhood. Writer Nicholas Meyer created a story about Sherlock turning to (an apparently clean and saintly) Sigmund Freud for help with his drug addiction. After a miracle cure through hypnosis, Holmes repays the favor by helping Freud track down a missing patient. The movie is rife with references to Doyle’s stories, smaller characters and in-jokes for Holmes fans, and a plot almost as unbelievable as “The Adventure Of The Devil’s Foot.” Overall, it’s a lot of fun. Here’s my bingo sheet:

Almost had the full shebang!

Toby! They added in Toby! That’s what I mean by tiny details. You overlook the overblown plot (and the heavy-handed revelation at the end) just so you can watch a fever dream where group of redheaded gentlemen bow to the detective right before a speckled snake appears in his bed. (Side note: I just remembered how I gained my fear of snakes and my mistrust of redheads…)

The Seven-Per-Cent Solution is just goodnatured, nerdy fun. Nicol Williamson plays the drug-driven Holmes with some of the manic energy of (and more pathos than) Basil Rathbone. Robert Duvall returns Watson to his roots. During the course of the movie, this Watson will climb a moving train and beat more than his share of bad guys, despite his war wound. However, despite Watson’s English bulldog loyalty to Holmes, the relationship most coveted in the film is that between Holmes and Freud (played by a young Alan Arkin). Nicholas Meyer portrays Holmes’s fictional deductions and Freud’s theoretical work as two sides of the same coin. Freud and Sherlock make a powerful crime fighting duo, with Watson in the back to provide muscle. The unfortunate side effect of this fact-meets-fiction pairing is the down-playing of Watson and Holmes’s partnership.

While some character moments do squeak through, mostly the film concerns itself with Sherlock trivia. The examination of Sherlock’s one fatal flaw doesn’t go very far. However the author’s affection for Sherlock is apparent not only in the details (like Toby!), but in the devotion to the model of the detective story: first the instigating incident, next the evidence, then deductions, action, and resolution. This respect (almost reverence) for the model and details of Sherlock is what sets The Seven-Per-Cent Solution apart from some of the tawdrier Sherlock-inspired films (like both of Guy Ritchie’s travesties). The Seven-Per-Cent Solution is a treat for Sherlock geeks.

Classic Film history & restoration nerd. Writer of A Year With Kate and Women's Pictures for The Film Experience. Follow me on Twitter @WeRecycleMovies.
View all posts by Anne Marie Kelly →
This entry was posted in Film. Bookmark the permalink.